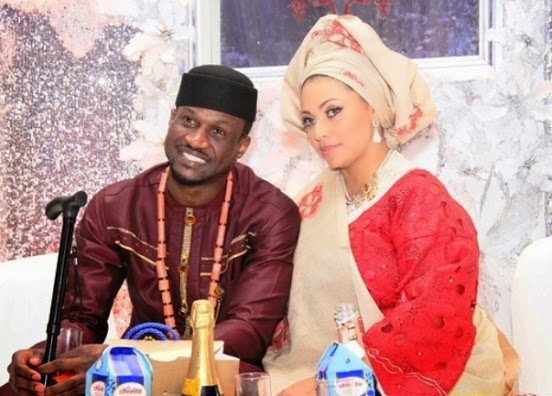 Peter Okoye of P’Square and Lola Omotayo’s love story is compelling and amazing. The couple have been in a relationship for over eight years before they finally tied the knot on Sunday, November 17, 2013.

There has been a lot of talk and whispers about their marriage, the family issues and the fact that Lola is by far older than Peter Okoye has been trending. But why did she decide to marry someone who’s her junior?

Below is Lola Omotayo’s stand on their age difference…

Lola, who was a Business Development Director at FKG2m a marketing agency in Lagos, had told the story of how she and Peter met and how the relationship started:

“My agency handles some of British American Tobacco brands and P’Square was doing a show for us at one of our events in Enugu. Though I had met Peter a couple of times before then, at the show there was some chemistry.

He asked for my number and I refused giving it to him. I told him ‘if you really want to know me, you have to find my number’. So he took it as a task and found my number and the rest is history.”
Lola, said to be in her 30s then and Peter in his 20s, was not disturbed by the age difference. Her reason:

“Like I said, Peter is an old soul and he always tells me that I’m like a 23-year-old. Age is just a number. Right now, you can see it around the world. Demi Moore, Usher and some known people. Even in Nigeria here, they are dating people far older than their age. So, we shouldn’t base it on the age factor. He doesn’t make me feel like he’s younger than me.”

D’banj Picked As Africa’s Ambassador For Beats By Dre

The Right Script Has Not Come My Way Yet – Genevieve

Beverly’s New Catch…Bimp…and we thought they were just friends!