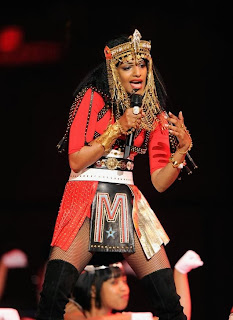 The National Football League has launched a secret all-out legal blitz against rapper “M.I.A.” over her now-infamous middle finger extension during the 2012 Super Bowl.

The Sri Lankan singer, who made headlines 18 months ago when she flipped the bird in front of television cameras during a perfomance of “Give Me All Your Luvin’” with Madonna and mouthing, “I Don’t give a sh–,” has been fending off a legal offensive from the National Football League ever since, according to the Hollywood Reporter, which broke the story.

Even Madonna herself said she “wasn’t happy about” M.I.A’s stunt, though dismissed it as a punk rock moment.

The NFL, however, was apparently much less foregiving.

Citing a breach of the her performance contract, the league’s legal team had drawn up a secret gameplan to demand $1.5 million in damages from the “Paper Planes” rapper.
Though the FCC did not pursue a fine, the league has seemingly instituted a zero-tolerance policy after the backlash from the Janet Jackson nip slip during the 2004 Super Bowl.

Though the statute of limitations for the FCC has passed, the NFL has continued to push its claim,

“This dispute concerns a blatant, intentional and calculated attempt by M.I.A., a musical artist, to garner worldwide publicity and attention for herself by making an offensive gesture to the cameras during the Super Bowl XLVI Halftime Show performance,” read the legal complaint filed with the American Arbitration Association and obtained by the trade publication.

“M.I.A.,” however, has mounted a defense of her own — proverbially flipping the bird right back at her accusers.
“She is going to go public with an explanation of how ridiculous it was for the NFL and its fans to devote such furor to this incident, while ignoring the genocide occurring in her home country and several other countries, topics she frequently speaks to,” her lawyer, Howard E. King told The Hollywood Reporter.
An NFL spokesman told The Hollywood Reporter that “any monetary damages for her actions would have been donated to charity.”