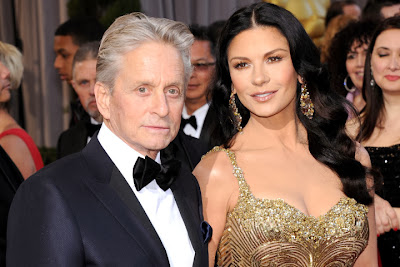 First he had throat cancer — which he said was a result of his performing oral sex on women. Then he thought better of admitting that.Now he says it was really tongue cancer.

“This was right before I had to go on a big tour for ‘Wall Street,’ ” the actor said in a British TV interview that aired on Friday, referring to his promotion of 2010’s “Wall Street: Money Never Sleeps.”

“And he said, ‘Well, if you really want to know why, if we do have to have surgery, it’s not going to be pretty. You’ll lose part of your jaw and your tongue and all of that stuff.’ So I said, ‘OK, sure.’ ”

So to avoid discussing the possibility of losing part of his face with reporters while promoting his movie, Douglas came forward in August 2010 and said he had throat cancer.

The survival rate for throat cancer is slightly higher than it is for tongue cancer — 90 percent compared with 85 percent — and there is less chance of it spreading malignantly.

Douglas’ story took a turn last May when he said his cancer — which he still claimed was throat cancer — was caused by the HPV virus, which can be contracted through oral sex.

Roughly 14,000 throat-cancer cases are diagnosed every year in the United States, about 70 percent of which are related to HPV.

But a spokesman for Douglas — now separated from Catherine Zeta-Jones — denied any definite link to oral sex.

“It was discussed that oral sex is a suspected cause of certain oral cancers as doctors in the article point out . . . , but he did not say it was the specific cause of his personal cancer,” the rep said the next month.

In his latest account, Douglas said it was really Stage 4 cancer that a Montreal specialist found after examining his mouth.

“I will always remember the look on his face,” he recounted previously. “He said, ‘We need a biopsy.’ There was a walnut-sized tumor at the base of my tongue that no other doctor had seen.”

Is Rihanna & Drake Rapping Up A Secret Romance

Planet Fitness accused of stereotyping people and being judgmental