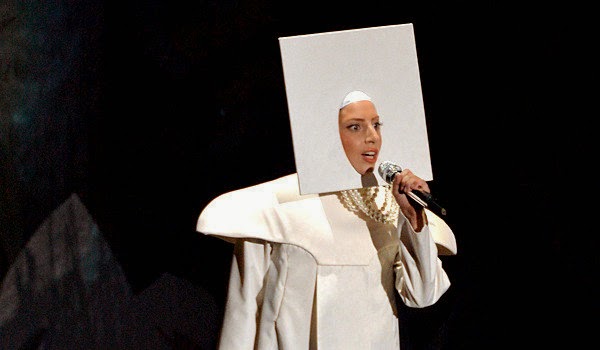 Lady Gaga premiered the video for her new single, G.U.Y on 22 March.

The video, fully titled G.U.Y.: An ARTPOP Film is over 11 minutes long and was shot at Hearst Castle in San Simeon, California. It features the cast of Real Housewives of Beverly Hills and Gaga wearing a long white wig and sexy white one piece.

On 21 March, the star headed to the Today show to discuss the new video, which took six days to shoot. “It wasn’t meant for the Today Show! It was meant for a club performance in Austin,” she said during the interview.

“We had our work cut out for us,” she said, adding that it was “such a pleasure working with the whole team. We just had a really, really great time.”

She also commented on the artist in her — which is the reason behind the vomit-artist who threw up on her on stage at her 13 March SXSW show.

“It’s about art. We both really believe in artistic expression and strong identities, and I support (Millie Brown) in what she does. And Artpop, my new album, is about bringing music and art together in the spirit of creative rebellion,” she said. “But we totally understand that some people won’t be into it.”
Watch the video below:

Boyewa Kelvin Igere - June 30, 2020 0
The more I progress the more narrow the path gets, not because I don't know what to do, but because my focus is locked...

“The Ascension” album Shoots 2Face to the Billboard Charts!