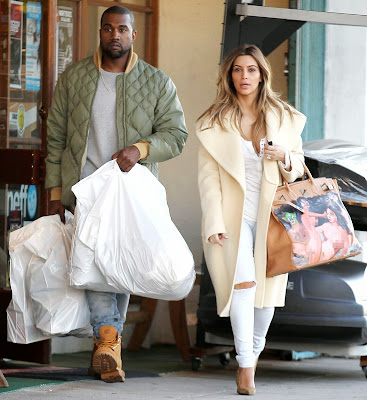 Even the girl who has everything doesn’t have this. Kanye West surprised fiancee Kim Kardashian with a truly priceless Christmas gift this holiday season: an Hermes Birkin bag that had been hand-painted by renowned artist George Condo.

Kardashian, 33, showed off the one-of-a-kind creation via Instagram on Thursday, Dec. 26. “#HandPaintedGeorgeCondo #HermesBirkin #OneofOne #ChristmasPresentFromYeezy,” she captioned a photo of the designer handbag, which features a surrealist painting of nude figures.

The Keeping Up With the Kardashians star also flaunted her gift while shopping with West, 36, in Woodland Hills, Calif., this week. She kept the rest of her all-white outfit simple, letting the bag take center stage.
Fans of the “Bound 2” couple may recognize Condo’s work from West’s 2010 album My Beautiful Dark Twisted Fantasy. The rapper commissioned five covers from the artist, including one of a naked sphinx straddling him on a blue couch, which was banned by both Wal-Mart and iTunes.
“I was challenging him with the imagery as well. He said, ‘I’m shocked, but I like it, and I gotta go with my gut feeling,'” Condo told Vulture of working with the rapper. As for the controversy surrounding the art? “The superimposition of people’s perceptions on a cartoon is shocking,” he said. “What’s happening in their minds should be banned. Not the painting.”

I am not interested in Elikem – German Fashion Designer