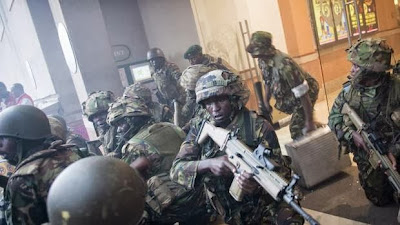 Kenya’s military, embarrassed by mounting evidence of large-scale looting by soldiers during the terrorist attack on the Westgate mall in Nairobi, is appealing for public help to identify and punish the looters.

“The Ministry of Defence is committed to get to the bottom of this matter,” the Kenyan military said in a statement on Thursday after a crisis meeting of top defence officials. Any soldiers found guilty of looting “will be firmly dealt with,” the statement said.

Earlier in the day, a Nairobi newspaper reported that footage from closed-circuit cameras showed Kenyan soldiers stealing money from cash registers at an abandoned supermarket at the mall within hours of the terrorist attack.

The evidence of looting is disturbing because it suggests that Kenya’s poorly paid and corrupt soldiers could be bribed to turn a blind eye to terrorist threats to the country. There is already speculation that the Westgate attackers may have entered the country by bribing border guards.
At least 67 people were killed in the attack.

A Nairobi newspaper, The Star, said the closed-circuit footage shows the soldiers opening cash registers and dumping cash into plastic shopping bags on the night of Sept. 21, while the attackers were holed up in a corner of the mall.

The footage shows three soldiers walking out of the supermarket with plastic shopping bags filled with cash, while others can be seen choosing items from the supermarket shelves, it said.

Kenyan security forces cordoned off the luxury mall after the attack, and the military took control around 7 p.m. on Sept. 21, about six hours after the attack began. The footage showed that the soldiers began looting the supermarket about two hours later, the newspaper said.

“Virtually all the shops in the mall were looted except the Bata shoe shop,” it reported. “Jewellery, watch and mobile shops were emptied. ATMs, banks and a casino also lost funds.”

Amateur video taken at a restaurant at the mall has shown scores of empty beer bottles after the siege, apparently the remnants of a drinking binge by the Kenyan soldiers. Alcohol stocks at other restaurants were also depleted.

The reports of looting have caused widespread anger in Kenya’s social media. Although there were many cases of heroism by Kenyans who rescued survivors from the mall, there is also growing outrage at evidence that authorities bungled the hostage siege and ignored warnings of a possible attack on the mall.

Shop owners who returned to the mall this week said their shops were ransacked. Cash registers were opened, laptops and cameras were stolen, and bullets were fired at safes in an attempt to force them open. Money and mobile phones were reportedly taken from handbags and purses that were left behind in the panic.

Soldiers weren’t the only ones involved in the looting. A Kenyan police constable was charged with theft after he was allegedly found with a bloodstained wallet and credit cards stolen from a victim of the Westgate attack.

Snooki might just be going too far with her second pregnancy

Mike Sorrentino Ready To Settle Down