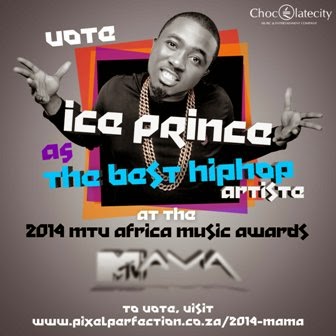 The rapper who wrapped up a tour in support of his latest album ‘Fire of Zamani’ in the UK weeks back, also recently signed a distribution agreement with Universal Music to distribute his music exclusively in Europe. “This couldn’t have come at a better time” says Ice Prince

He is already a hip hop celebrity in his native Nigeria – now Ice Prince wants to make a name for himself further afield.

The singer recently wrapped up a tour in support of his latest album ‘Fire of Zamani’.
He says his inspiration comes from home: “My music is very Nigerian, it’s very indigenous, it’s very local. You have to love a Nigerian accent, or love Nigerian melodies, or love Nigerian vibe or beats to relate to it.”

Unlike other well-known Nigerian artists, like the charismatic and world-famous Fela Kuti, Ice Prince says that although he may flirt with political issues, politics isn’t his main focus: “I write based on how I’m inspired,” he says.

“On my second album ‘Fire of Zamani’, I had some songs that I tossed up some political topics, but I’m not going to say that’s what I represent. Like I’m conscious I want to talk about issues in society and stuff, if I’m inspired to talk about the fuel crisis, or the poverty in this state or whatever, I’ll do it, I’m not scared to talk about anything,” he adds.

Ice Prince, who already holds a number of awards, including the 2013 Best International Act Africa, is hoping to bag the upcoming Best Hip Hop gong at the MTV Africa Music Awards in June.