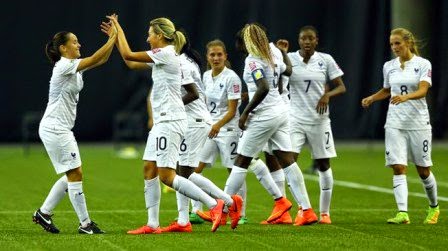 Hot favourite for the 2014 FIFA U-20 Women’s World Cup France announced their presence in Canada with a 5-1 victory over the Las Ticas of Costa Rica at the Montreal Olympic Stadium on Thursday.

The 2012 World U-17 champions took the lead as early as the 7th minute from Claire Lavogez’s expertly taken spot kick which went straight into the roof of the net.

Robert doubled the French’s lead in the 18th minute with a side footed kick thanks to Kadidatou Diani who set her through beautifully after going past three Costa Rican defenders.

Gripped with fear, Fabiola Villalobos scored an own goal in the 22nd minute when she attempted to clear off Lavogez’s corner kick. Lavogez scored her second on the day in the 35th minute with a spectacular non drop shot.

The French reduced the tempo of the game in the second half but managed to add one goal in the 53rd minute through Ouleymata Sarr.

The Las Ticas had a consolation goal in time added on through their best player on the night Melissa Herrera. The French will take on New Zealand in their next match whiles Costa Rica will face Paraguay.