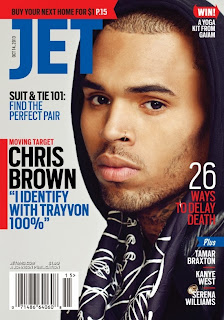 I swear Chris Brown will not be satisfied until every last person on Earth dislikes him. The latest in his constant string of reasons to abandon Team Breezy comes in the form of an interview with JET magazine where Brown seems to want beef with Jay Z.

“No disrespect, because I’m a fan, but nobody brings up the fact that [Jay Z] stabbed somebody and sold drugs. He gets a pass,” said Brown.

What? Chris, you beat a woman. Then proceeded to parade around like an asshat for years (throwing a tantrum on the TODAY show, being a terrible neighbor, starting nightclub fights with  Drake).

Yes, Jay sold drugs prior to his rap career taking off (so we’re talking pre-Reasonable Doubt, which is 17 years old). And yes, Jay did stab Lance Rivera in 2001. But, he served his three years probation and hsn’t done a damn thing since except being one half of the most successful celebrity couple running and turning himself into a full-on mogul so that he wouldn’t be in the sort of environment where a stabbing might break out.

Meanwhile, you’re still thought of as one half of one of the most dysfunctional celebrity relationships of all time. People may eventually forget, but you have to give them a reason to.

Meshack Amadi - August 8, 2020 0
Facebook CEO Mark Zuckerberg shares his feeling of joy as he joins Jeff Bezos and Bill Gate in bearing the centi-billionaire status according to...

Meshack Amadi - August 8, 2020 0
Marlian President Azeez Fashola popularly known as "Naira Marley" have reportedly been arrested with his manager for breaking the lockdown restrictions, after...

Meshack Amadi - August 8, 2020 0
Grammy nominated superstar "Burna boy" has taken over the media after he announced the release of his upcoming album titled "Twice as Tall". The...

Jwoww’s baby has changed her life

Wiz Khalifa And Amber Rose Could Be Back Togather Again