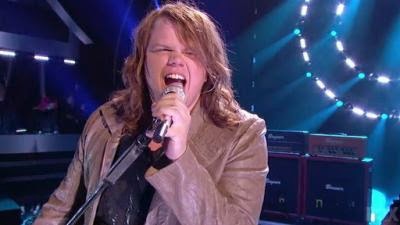 After slugging it out with hundreds of contestants who put up for the competition, Caleb Johnson comes out as the American Idol, 2014.

According to Reality Rocks, yesterday Wednesday, May 21, Caleb Johnson made American Idol history, becoming the first true hard-rocker to win the show.

Before winning this year’s competition, Caleb had to try out for the show three times to get this far: He first auditioned in Season 10, when he made it to Hollywood Week.

He gave it another try in Season 11, but was cut in the Vegas top 40 round after messing up his lyrics.

But this year he was arguably the most consistent entertainer of Season 13, and he never once landed in the bottom two or three. He performed songs like Led Zeppelin’s “Dazed and Confused,” the Black Crowes’ “Sting Me,” Whitesnake’s “Still of the Night,” and Paul McCartney’s “Maybe I’m Amazed” and they were some of the most phenomenal of the entire season.

Turn Up the Heat at Club Ultimate Enugu