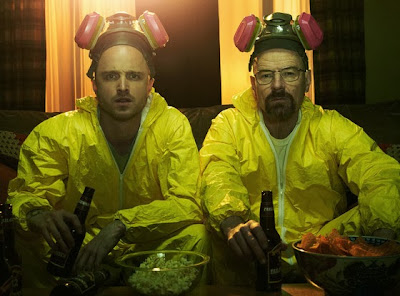 Aaron Paul managed to raise a nice chunk of change for the anti-bullying charity The Kind Campaign by way of a contest he had been holding via the fundraising site Omaze.com.

The incentive for donating? The chance to win a trip to Los Angeles to watch this Sunday’s Breaking Bad finale with the show’s cast.

“We raised nearly 1.8 million for @kindcampaign,” Paul tweeted early Thursday morning soon after the contest ended. “That is because of all of you. Words can’t express how unbelievably grateful I am. #iLoveU.”

As a result, two fans and their guests will now get picked up personally by Paul at Los Angeles International Airport and will later acccompany him and costar Bryan Cranston in the Breaking Bad RV to the finale screening.
“I don’t know what else we can do to make that night more incredible for us,” Paul said in a video posted on Facebook. “Maybe I can be the godfather of your children or possibly travel back in time to save Jane’s life. I cannot begin to tell you how incredibly grateful I am.”

Tonto Dikeh steps out for the Lagos Premiere of “Keeping My...