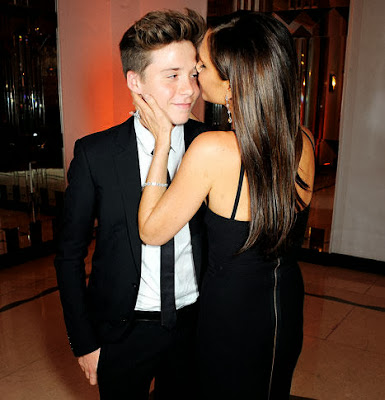 The Beckham brood is all about the love! Victoria Beckham affectionately planted a big kiss on her oldest son, Brooklyn, who accompanied his mum to the 2013 Harper’s Bazaar Women of the Year Awards in London on Tuesday, Nov. 5.

The fashion designer, 39, stunning in a floor-length black gown, shared a rare red carpet moment with her 14-year-old son as she adoringly gave him a motherly smooch on his forehead. Brooklyn was at the event to support his mum as she received the Special Contribution to British Fashion award before a room packed with famous talent including Stella McCartney, Frida Giannini and Cate Blanchett.

The mother of four — Brooklyn, Romeo, 11, Cruz, 8, and Harper, 2 — later shared an adorable photo of her kissing her darling date with her 6.9 million Twitter followers: “Special evening with my family celebrating women at the @BazaarUK awards in London,” she wrote. “I’m so proud of Brooklyn x vb.” The former Spice Girl, who in recent years has launched a successful designer line, was still basking in the glow of Tuesday evening’s honors the following morning. “Beautiful evening with my family at @BazaarUK awards,” she wrote. “Thank you for your love and support, I love u x Victoria.”

Her family has been unwavering in showing support for the brunette beauty’s fashion career. On Oct. 23, husband David Beckham accompanied his beloved to a dinner celebrating the 2013 CFDA Vogue/Fashion Fund Finalists in Beverly Hills. While younger brother Romeo made a splash in the fashion world when he was cast alongside Edie Campbell and Cara Delevingne in Burberry’s spring/summer 2013 ad campaign, it seems Brooklyn wants to follow in his famous footballer father’s footsteps. The oldest Beckham son has reportedly been training at Manchester United, although he has yet to be offered a deal.–Tweet @ModelMeSpot