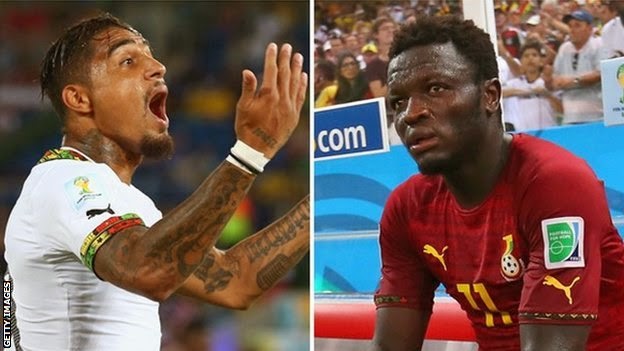 Ghana player Kevin Prince Boateng has insisted that he did not, as is being reported, insult coach Kwesi Appiah.

The player who has been suspended indefinitely by the GFA following his “vulgar verbal insults targeted at coach Kwesi Appiah during the team’s training session in Maceio this week.”, was reported to have exchanged angry words with coach Kwesi Appiah.

The player has, however, refuted the claims and stated that he had not verbally abused the coach in any way. In an interview with German newspaper Sport Bild, Boateng gave his version of events.

“Yesterday, there was an incident during training where Sulley Muntari were just joking around.

“I said that he had played the ball with his hand.

“He said no. Then I laughed and said: ‘Hey, are you the referee or what?

“The coach asked us why we had laughed wondered. We said that everything was okay. Then he sent us to the cabin.

“After training I went to the coach and asked him if he had a minute for me.

“I asked him what he had against me? Then he started yelling at me. He insulted me.

“When I learnt of my suspension today, I accepted it, only no one should believe that I had insulted the coach or something.

“I now travel from Brazil and I wish my colleagues all the best for the World Cup and the match against Portugal. ”

The player is reported to have already left the Black Stars camp in Brasilia.

This news is a further blow to the Black Stars following reports of player unrest in the camp due to the non-payment of their appearance fees.

The Black Stars face Portugal on Thursday needing a win to keep alive any chances of progressing from the group.