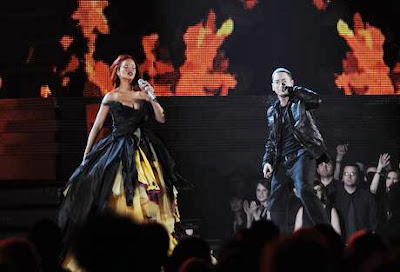 Rihanna has made chart history after her single with Eminem went straight to number one on the Official UK Singles Chart.

The Barbadian singer joins Elvis Presley and The Beatles as one of just three acts to have scored a number one single over seven consecutive years.

“The Monster”, which features Rihanna’s vocals, is taken from Eminem’s new album The Marshall Mathers LP 2.

The pair last released “Love the Way You Lie” in 2010, which went on the become one of the UK’s biggest-selling single of all time, with more than 1.15 million copies sold.

The single marks the eight time both singers have had a UK number one. Eminem last went to the top of the charts in 2006 with “Smack That” featuring Akon.

In the albums chart, Arcade Fire’s fourth album Reflektor knocked Katy Perry’s Prism off the top spot, outselling the US singer by nearly two to one over the past week, according to the Official Charts Company.

Cheryl Cole’s track listing for album ‘Only Human’ out