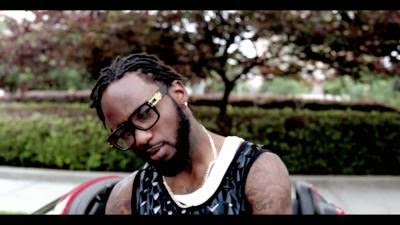 The rumour began after rapper Godwon shared surveillance video released by Police in Houston of a man stealing $300 from an ATM machine in a department store in Houston. Social media users, blogs and Godwon alleged the man was Sauce Kid now called Sinzu.

According to Houston police, the suspect is described only as a black male, 20 to 30 years old, 5 feet 7 to 6 feet 2 inches tall and 150 to 190 pounds. He had a mustache and beard, and long dreadlocks.

Since the news and this surveillance video went viral, Sunzu whose real name is Babalola Falemi has been compared with the man in the video as his physical characteristics had looked like this especially in a recent video shoot he had in Houston.

His friend turned foe Godwon has also been merciless on social media, driving the fire of allegation
Sinzu himself has further fuelled the allegations by deleting his instangram page where tons of pictures of him wearing his dreads and beard had been posted, especially pictures of his shoot in Houston.

But the singer has insisted he is not the man in the video.

“Man that aint me” he tells a blogger friend Tosin Adeda on BBM.

Houston police say they are still hunting for the man who had used a woman’s account information to withdraw the money and have asked anyone with useful information to call crime stoppers.

What do you think? Was that Sinzu or not?

Jonas Brothers Break Up: All the Exclusive Details Behind Their Split!