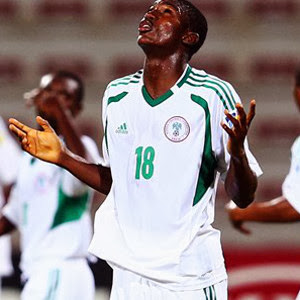 The Nigeria Under-17 football team, the Golden Eaglets, produced a masterclass of attacking football in Dubai to beat a well-drilled Sweden side 3-0 on Tuesday.

Sweden had the first chance in the first minute of the game when Elias Andersson burst through the right with great pace but his deflected cross was hooked wide by Valmir Berisha to send the Nigerian nerves jangling early on.

Berisha had scored twice against Nigeria in the group stages.

Three minutes later, Nigeria had a chance to respond after some lax Swedish defending freed Musa Yahaya in the penalty area but the youngster hesitated a split second too late and the chance was gone. Seconds later, Taiwo Awoniyi had a chance to make amends but his shot lacked power.

The Nigerians were struggling to get into their stride as the well-organized Europeans marked well and denied the Africans of space for their highly skilful individuals to play their usual expansive game.

As a result, the Golden Eaglets were restricted to long range shooting and one of such from Yahaya in the 11th minute merely warmed the palms of the Sweden goalkeeper, Sixten Mohlin.

It was quite cagey in the opening minutes as the Swedes looked to catch Nigeria on the break and almost managed to do so in the 14th minute when an unmarked Linus Wahlqvist placed a header wide off a pinpoint cross with just the Nigerian goalkeeper, Dele Alampasu at his mercy.

Nigeria eventually got the breakthrough on 21 minutes when Taiwo Awoniyi latched on to a perfect through ball from Kelechi Iheanacho and showed nerves of steel to finish past Mohlin.

The West Africans smelt blood and pressed for a second. Three minutes later, Abdullahi Alfa’s strike from range was saved comfortably by Mohlin. The young Swedes were looking remarkably shell-shocked, out of their depth and had yet to muster a single effort on the Nigerian goal at this stage.
On the half hour, Nigeria failed to double their advantage when they probably should have done so. Captain, Musa Mohammed embarked upon a characteristic lung-bursting run on the right before delivering an inch perfect cross that was headed wide by the unmarked Chidera Ezeh.

Ezeh had another chance to get his name on the score sheet in the 35th minute but blasted an effort from the edge of the Sweden box high and wide.

The Swedes were almost back on level terms a minute later as Gustav Engvall carved out a chance out of nothing following a quick throw in by Johan Ramhorn. Engvall’s snapshot from a very tight angle was however beaten out by Alampasu as Nigerian hearts beat again.

Upon resumption, Nigeria almost doubled their tally but Ezeh could only head against the post after Samuel Okon crossed with distinction from the left on 46 minutes.

With the score at just 1-0 to Nigeria, Sweden always had a route back into the game and almost got back on level terms in the 52nd minute when a well-worked free kick came to futility with Erdal Rakip bending an effort just wide.

The Eaglets continued to create the better openings and Yahaya came close with a shot that missed the target by whiskers in the 59th minute.

Sweden hit it almost immediately when Noah Sonko just failed to get onto the end of a free kick. The slightest of touches by the Swede would have levelled the scores as the Nigerians against showed their naivety at defending set pieces.

Yahaya continued to make inroads and almost came close to scoring with a fizzing shot in the 67th minute as Nigeria continued to look to put the game to bed.

They thought they had scored a second in the 68th minute but Awoniyi’s effort was correctly ruled out for offside.

Nigeria continued to knock on the door for a second goal but Ezeh’s low shot was pushed out for a corner by Mohlin in the 72nd minute. Minutes later, Iheanacho got on the end of a flowing team move but Mohlin was outstanding again.

In the 76th minute, Sweden almost levelled after Gentrit Citaku supplied a wicked cross that was met with precision and power by Carlos Strandberg only for Alampasu to deny the substitute with a fine reflex save from point blank range .

From the resultant corner, Alampasu was called into action and his handling was exemplary again.
The resistance from Sweden eventually broke down in the 80th minute when Awoniyi fed Samuel Okon in the Sweden penalty area. The left-back showed great composure to curl home past a despairing Mohlin and effectively seal Nigeria’s place in the final.

Ezeh eventually atoned for his missed chances earlier in the game with a simple third in the 81st minute as the three-time champions closed out the game at a canter.

The Nigerians will now meet defending champions, Mexico in the final on Friday in Abu Dhabi. Both sides met in the group stages with Nigeria running away with a 6-1 victory in Al Ain.