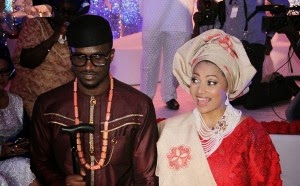 Reports is that P-Square had put their differences behind them and moved on, this development was confirmed early Friday when the eldest member of the group, Jude Okoye, who also doubles as the manager of the duo, took to his twitter handle @Judeengees with a statement that “family is everything indeed. Long live P-Square. This was followed by Peter’s tweet @PeterPsquare “forever Psquare”. Few minutes after Peter’s came statement from Paul’s twitter handle @RudeboyPsquare saying “stronger than ever”.

However, contrary to report that the fight between Peter and Paul of P-Square was not the reason the group broke up last week, a source has insisted that it was actually the genesis of the crisis as it was barely 48 hours after that ugly incident that Jude went on line to announce the breakup of the group after being together for almost 15 years. R has gathered that Peter and Paul had been engaged in fisticuff during one of their rehearsals last month.

Although it can’t be confirmed what Paul said that really got Peter, the elder brother, angry, source said Paul had sniggered at the warning that Peter gave him over derogatory remarks the latter had been making of Lola, the former’s wife, lately. Paul allegedly “said many nasty things about Lola while the rehearsals were on and what Paul said exactly that got Peter angry could not be pointed at”, R’s source said on Thursday evening.

Having heard enough that day, angry Peter was said to have hit his younger brother and a fight broke out. Even the eldest brother could not do much to separate the two until both wore each other out. By this time though, the rehearsals had been called off and many of the dancers left the venue, while some stayed behind to find out what had actually happened between brothers.

The bone of contention, Lola, has not been totally accepted into the family by Jude, Paul and their late mother. Reports even had it that the late mother did not hide her hatred for Lola. She saw her as a Yoruba gold digger and was not in support of the relationship. But those who knew Lola said she had never lacked and was not in the relationship with Peter for his money. In fact, R source said “P-Square did not have anything by the time Peter started dating Lola “It was even Lola that used to bail them out with cash then, to the knowledge of Jude, Paul and their mother. It was convenient for them to use the lady to rise in the industry because she gave them her connections, but because they started making money, that was when it occurred to them that she was a Yoruba woman and was not suitable to their family for marriage.

“Peter loved Lola and because he stood his ground against his mum and other family members, they started taunting him and made his life miserable, especially the eldest brother. Jude had always been antagonistic and disrespectful of Lola. He believed that Lola was a show-off whenever she was spending money on their family then. They all took what she gave, but now, they want her out and Peter will not allow that.

They just want to repay the girl in bad way and God will not let that happen”, a female broadcaster also said.

Narrating further, she said; “I remember when Peter and Lola were still dating. Peter was so ashamed of taking Lola to their house around Ilupeju then. It was a two-room apartment where the whole family of about six, including their sisters who now want Lola out, stayed, even with their dogs. Lola did not insist on seeing their house because Peter did not want it. One day, Peter was ill. Somehow, Lola got to hear about her boyfriend’s illness and she asked a girlfriend who knew the house to take her there. It was a surprise visit of course and many of them did not like it. She even bought them air conditioners immediately she left the house because the place was stuffy. She did all of this out of love”, she added.

Two days after Peter and Paul were in a fight, Jude was the first to announce that the group had broken up. Later, Paul begged their Nigerian fans to pray for the Okoye family. Paul’s message has however been generating rumours that all that has happened is a hype of sorts as the group is trying to stay relevant in a music industry that is fast growing and has little respect for artistes who are not regularly dropping hits.

Nearly one week after Jude posted on twitter that he was ‘done’, the stand-off in the Okoye family is far from abating as Peter was said to have given condition for peace that Lola must be accepted and respected by the family or risk total isolation from him.

“Peter is tired of the long years he has had to plead with his family to accept the woman he has decided to spend the rest of his life with.

“He wants Lola to be welcomed in the family just as Anita (Paul’s wife) has been accepted, irrespective of her tribe or age. This is his condition.”

Although the twins had fought at their dance rehearsal earlier in the month, this was not what had ultimately prompted Peter to severe his relationship with P-Square.

The source said Peter “has taken their attitude towards Lola even more to heart than what role he plays in P-Square, be it singing or dancing. “He can no longer endure the ill-affection concerning his wife.”

Source also said that the crisis had escalated after it was learnt that Peter had allegedly bought a house for Lola in the United States of America.

My New Wife Gives Me Peace-9ice