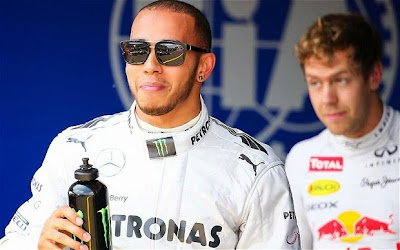 Lewis Hamilton said that he felt the need on Tuesday to “clarify” comments he made in the wake of the Korean Grand Prix on Sunday to the effect that Sebastian Vettel’s dominance was becoming a turn-off for fans. The Mercedes driver said that he had intended no disrespect towards Red Bull driver Vettel, who he considered a “true champion”.

Hamilton told reporters following the race last Sunday that he “felt for the fans” after Vettel’s fourth successive victory put the Red Bull driver within touching distance of his fourth successive drivers’ title.
If Vettel wins in Japan this week, and Ferrari’s Fernando Alonso finishes lower than eighth, the 26-year-old German will be crowned champion with four races of the season to spare, just as he was in 2011.
“Personally I feel for the fans because I remember the period of time when Michael Schumacher was winning,” Hamilton said.
“I remember waking up in the morning to watch the start of the race and then going to sleep, and then waking up when it ended because I already knew what would happen. I am pretty sure a lot of people were doing that today.”
Although Hamilton never said that Vettel was boring, or implied that the triple world champion was doing anything other than a brilliant job, the 28-year-old clearly felt the need yesterday to make it clear that he meant the predictability of the racing was sleep-inducing rather than the Red Bull driver himself.

“Good morning all,” Hamilton wrote to his 1.7 million followers on Twitter. “Read some of the stories/reports of my comments on Seb. Feel the need to clarify my thoughts. Seb is great champion!!

“Not only that, he is a great human being who is funny and humble. Deserves all the success he is having! I admire his dedication & ability to consistently perform without mistakes. This is the mark of a true champion.”

The 2008 world champion ended his paean with a rather ambiguous comment regarding Vettel’s Red Bull car. “Regardless of what you & I may think about his car, at the end of the day he’s doing the perfect job. I’m just grateful I get to drive in an era with so many great drivers like him. God Bless & have an amazing day!”

Meanwhile, Lotus team principal Eric Boullier has given ­encouragement to Nico Hulkenberg by saying that the German’s weight would not be a major factor as to the team deciding whether to bring him in for the Ferrari-bound Kimi Raikkonen.

The issue has become a hot topic in the sport, with the introduction of a new and heavier V6 turbo power unit and energy recovery systems next year giving more of an advantage to the lighter drivers.

Hulkenberg, who races for Sauber, is one of the tallest and heaviest ­drivers on the grid.

“We’re more interested in the talent and potential of a driver rather than the difference of a few kilos,” Boullier said. “We have confidence in our development team to be able to produce a car for the 2014 regulations which should be competitive in the hands of any driver we consider for next year.”

John Grant, the former chairman of the Motor Sports Association, has been elected to replace Stuart Rolt as chairman of Silverstone’s owner the British Racing Drivers’ Club.

The BRDC said in a statement that Rolt would stay on as an adviser to the board while the long-awaited deal with an investor to develop the circuit was completed.