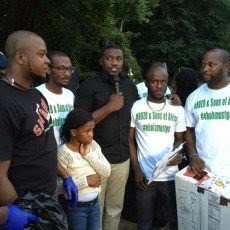 Ghanaian actor, John Dumelo has extended his hands of fellowship to his country’s neighbors, Sierra Leone, which is currently battling with the killer virus called Ebola.

The actor teamed up with Sierra Leoneans in Maryland, USA, to raise awareness for the disease, which has killed over 1000 lives in West Africa. Only recently did Nigeria overcome the spread of the disease in Nigeria after a Liberian was said to have imported it to the country.

The Ghanaian ‘fine boy’ actor, according to reports, also contributed his quota to the fight against the disease through his foundation.

John Dumelo added that his foundation was ready to support the eradication of Ebola from the affected African countries, calling on other relevant bodies to support the cause in order to save precious lives of Africans.

Nick And I Are Just Close Pals-Amber Rose