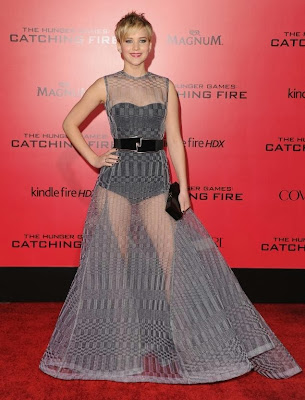 Apparently the action flick red-carpet trend this year is sheer confidence. First, Gwyneth Paltrow wore a see-through paneled dress for the “Iron Man 3” premiere in April, turning heads as she turned to walk, and revealing that she opted out of wearing any underwear.

Then, “Thor” star Jaimie Alexander rocked a racy black cutout number, leaving little to the imagination at the premiere of the latest installment of her Marvel franchise on Nov. 4.
Even Hayley Atwell, star of “Captain America” came dangerously close to baring her body in a sheer embellished nude gown at the Evening Standard Theater Awards on Sunday.
But it isn’t just the Marvel movie queens showing off their enviable bodies.

On Monday night Jennifer Lawrence joined the club with an entirely see-through purple Dior gown at the Los Angeles premiere of her new flick, “The Hunger Games: Catching Fire.”

Lawrence, 23, covered up the necessary parts with a black strapless leotard underneath, but otherwise her sexy silhouette and long legs were on full display.
Her “Hunger Games” costar Jena Malone subscribed to the same catalog of sheer fashion, donning a gold block patterned cutout sheer dress —apparently without any underwear.
But back to Lawrence — the Oscar-winner’s sexy dress was enough to distract from her new pixie haircut as the must-see part of each red carpet.
The starlet has managed to pull off several different styles with her short do while promoting her movie in Paris, Rome, Madrid, London and Germany.

9 days to go for Art Monaco