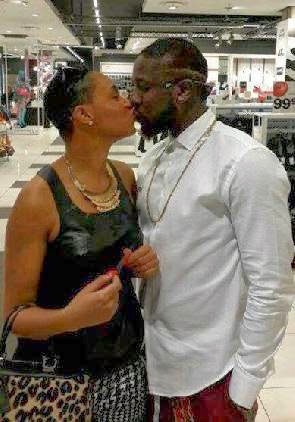 Graphic Showbiz reported in its Monday, March 17, 2014 Edition with a headline; “End Of Polikem Fairy Tale?”

However, the state owned entertainment newspaper stated emphatically that Big Brother lovebirds Pokello and Elikem have split, and the “fairy tale” love affair which has won the couple considerable admiration in both Ghana and Zimbabwe has collapsed.

They continued that Elikem had confirmed the break-up to them but refused to give details.

In an interview with Peacefmonline.com, the German based fashion designer with Real Estate interests stated that she had no love relationship with the former big brother housemate but what brought them together on the fashion stage was purely business.

The mother of two who came from Hannover, Germany about a month ago to outdoor her clothing line confirmed that she and Elikem were not dating and was not pregnant as stated by the paper.

According to her it is barely a month since they got to know each other through the fashion show since Elikem modelled for her, but anyone who had seen them together would think they have been dating or known each other for years.

“What I have with Elikem is purely business and nothing more; since I’m somehow new in the country he is helping me with some stuff and my rounds around. I am trying to get a shop since I will be moving to Ghana with my mum and two children in April and a whole lot of other things.

“Though I have been separated from my husband for about six months now, we are not legally divorced as we are still working on it, so I don’t need any man or Elikem in my life at this moment,” she told Peacefmonline.com.

She added that she is not interested in Elikem.

Speaking to Elikem on the issue, he said Pokello is still the love of his life and nothing had changed.

“Nothing will make me change my mind from Pokello, we love each other and I don’t intend to leave her for any woman,” he confirmed.

He pleaded with all who are misinforming the general public to desist from that.