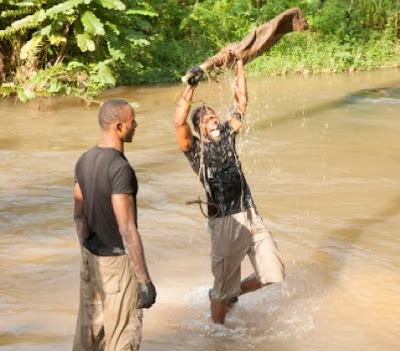 Dennis Okike has emerged the 10th Ultimate Champion! He outsmarted Dr. Edmund Umeabuani and Ifunanya Onike in the waters of Usaka River, where the final battle among the warriors fervently seeking for the 10th symbol took place.

On the final day of the search, the warriors got a message from the Council of Elders ordering them to pack their bags and make their ways to where they draw water. Chidi awaited for them and gave them the next set of instructions.

The final task was to search for the 10th Symbol. To do that, each of them would make use of a clue that would take them to two different locations to retrieve two pieces of the map that would lead to where the 10th Symbol was buried. Another clue at their first locations would direct them to the next location. It was a race against time and the last man to the next location was evicted.

Edmund and Ifunanya’s first clue led them to the Place of the Talking Drum to retrieve the first map piece, while Bobby and Dennis went to the Mud Field. Subsequently, Bobby and Dennis headed to the Place of the Talking Drum for their second piece, while Edmund and Ifunanya raced to the Mud Field. Edmund returned first, followed by Ifunanya. Dennis edged Bobby out of the quest when he beat him to the finish line. Bobby was instantly evicted.
With their maps pieced together, the remaining warriors had all they needed to proceed to find the Sceptre. On their maps three spots were marked ‘X’ as possible places the 10th Symbol was buried. Ifunanya was in the lead, having figured out the direction first. However, her first attempt at crossing the river with the aid of a rope saw her falling into the water while Edmund and Dennis moved on.
Edmund arrived first and headed straight to one of the spots marked on the map and began his search. Dennis joined shortly. Ifunanya had barely stepped in the river when Dennis raised what turned out to be a false alarm. All he had was a piece of debris laying under the river. The protracted search had the warriors glancing at their maps intermittently as Dennis kept digging up dirt after dirt from the river.
After many futile efforts Dennis eventually dug up the Sceptre from under a slant palm tree in the river and thereby ended the long search for the 10th Symbol. He was instantly inducted into the order of Heroes as the 10th Ultimate Man by Chidi Mokeme, the anchor-man.
For his feat, Dennis will get N10 million and a brand new Mitsubishi Pajero 3.0L GLS AT (full Option) courtesy of CFAO Motors Nigeria, the official automotive partner of Gulder Ultimate Search 10. For emerging the last female contestant standing, Ifunanya is already guaranteed N1 million in addition to her prize money.
In the same vein, Kalu Kalu, a final-year student of Industrial Mathematics in the Federal University of Technology, Owerri, Imo State, has emerged as the first winner of the first ever fans edition of Gulder Ultimate Search. The fans edition of the search was hosted by Bob Manuel Udokwu. Gulder gave fans and viewers of the show a chance to compete in Nigeria’s first 100 percent local content reality TV show from the comfort of their homes.
To qualify, contestants bought bottles of Gulder beer and looked under the crown corks for unique codes. The codes were then sent to 20388, along with the consumer’s name, age and state. The consumers receive SMSs with questions from clues related to the GUS 10 transmitted on TV. Consumers also participated via mobile web: which involved logging on www.gulderultimatesearch.tv, registering their details and entering the crown cork codes to provide answers to the questions.

Joselyn Dumas and Gideon Okeke to ‘tango’ in “Fever Rain”