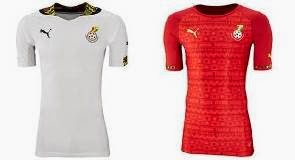 Ghana’s jerseys for the 2014 World Cup has been ranked the best kit among the thirty-two countries participating in this year’s tournament.

The ranking which was published on buzzfeed.com described the jersey as having originality due to the unique design around the collar as well as the sleeve cuffs inspired by the Kente cloth design.

On Patriotism, buzzfeed.com described the jerseys traditional watermarking which incorporates the stars as brilliant.

Ghana’s jerseys were designed by Puma and it is characterized by multicolored patterns of bright colors and geometric shapes.