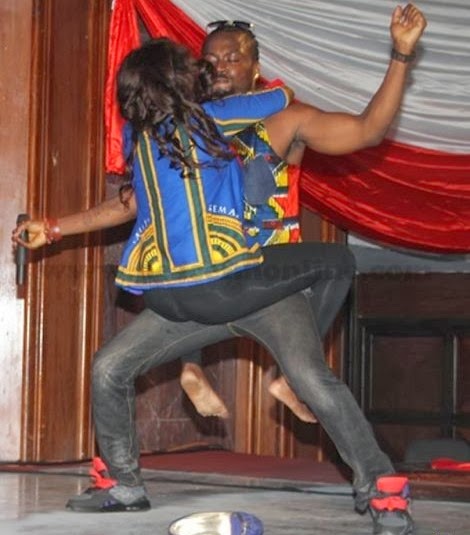 Samini gave a female fan more than she expected at the “F14” concert with Kwabena Kwabena and friend which took place at the Accra International Conference Centre yesterday .

During his energetic performance Samini called for one female fan to join him on stage to perform his hit song “Tempo”. An over excited female fan quickly rushed voluntarily on stage and Samini asked if she is ready to do the ‘fast tempo’ dance and she answered “yes am very ready.Samini doing the “Fast Tempo” dance. Immediately the band started the song Samini carried the lady, threw her hands on his shoulders with her legs around his waist.

As soon as Samini started the dance the lady pleaded with Samini to slow down and she hurriedly run off the stage saying she can’t take it anymore.

The MTV Africa Music Awards is scheduled to hold in June